Bear at Cabin in The Great Smoky Mountains

These are the last of the pictures I have to share from our vacation we took in June which was partially to celebrate our 10 year anniversary, which is today!  Joe and I had such a wonderful, relaxing, exciting, refreshing time away, and I feel so incredibly blessed that we were able to go as vacations are not something we typically prioritize.  That said, I certainly hope we don't wait 10 years for our next vacation!  😬
These pictures are all from our last evening at the cabin.  We had a yummy dinner which was actually an assortment of leftovers from restaurants we had gone to other evenings.  We played a couple board games, including a new one we had bought at a local store called Cascadia which felt thematically appropriate for our trip and is just a great game.  Then we decided to enjoy one last sunset since it was a gorgeous, clear evening.  Joe took the drone out, and I had my camera.  As we were on the deck, I moved to the corner to get a different angle.  I heard something behind me, and I looked and saw a big, black figure under the neighbors tree.  I gasped and froze.  Joe asked what was over there as he couldn't see, but I couldn't answer as I was so stunned.  Under the peach tree was a bear.
We walked along the deck to be a bit closer as he clearly didn't care about us or the neighbors who were even closer to him as they were painting the outside of their cabin.  At some point the guy came down off the ladder and disappeared around the other side of the house.  A couple minutes later, the bear got up and checked out the ladder and also disappeared to the other side of the house.  Joe and I briefly chatted to the neighbors who had moved to the upper deck at the back of the house.  They said the bear had come around on a previous day and eaten cat food they had out for a stray cat that hung around.  Joe and I went back to enjoying the sunset.
About 15 minutes later, I heard and saw movement by the neighbors house and quickly knew the bear was coming back.  He turned and walked up the steps to their deck, and I called out to them to let them know he was back and that he was right below them.  They thanked me for letting them know and commented that there wasn't much that they could do so they just continued working, but not until after they peaked over the side of the deck and locked eyes with the bear directly below them.
The bear wandered around coming close to Joe and I, but stopped and even laid down for a bit.  Joe decided to fly the drone closer to the bear to take a video of him, which the bear didn't seem to mind.  After a few minutes, he got up, and returned to the peach tree.  Eventually, he had eaten his fill.  He got up, crossed the road, and climbed over the fence where we didn't see him again.  It was such an awesome experience!  I am thrilled I had my camera and that Joe had the drone to capture the moment to remember forever! 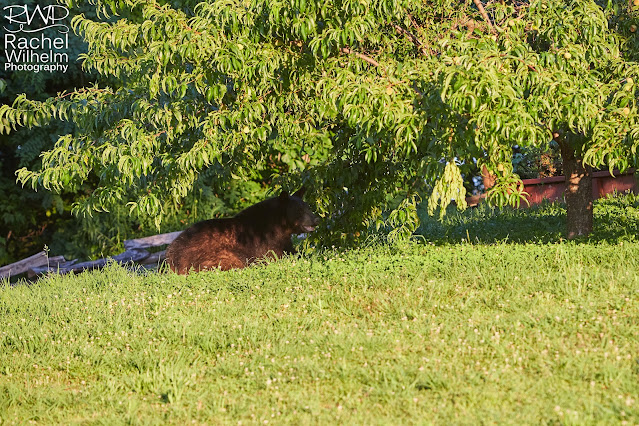 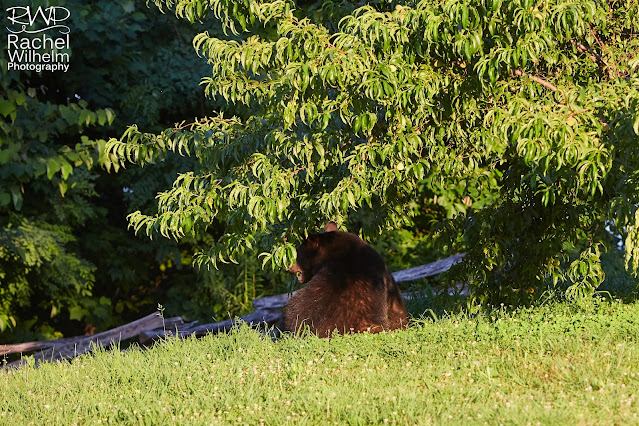 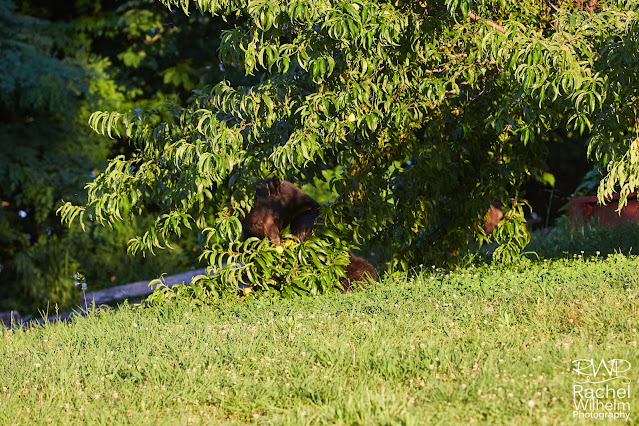 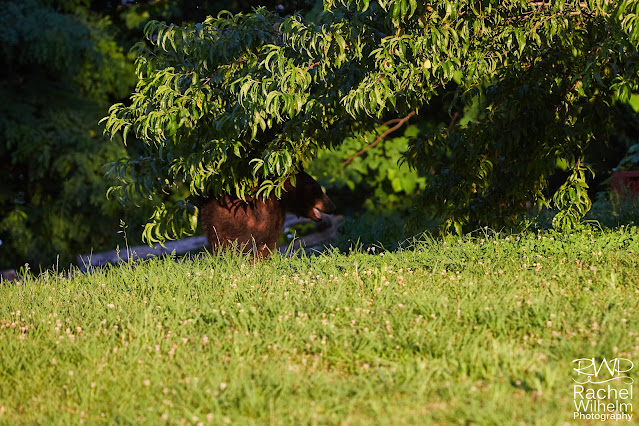 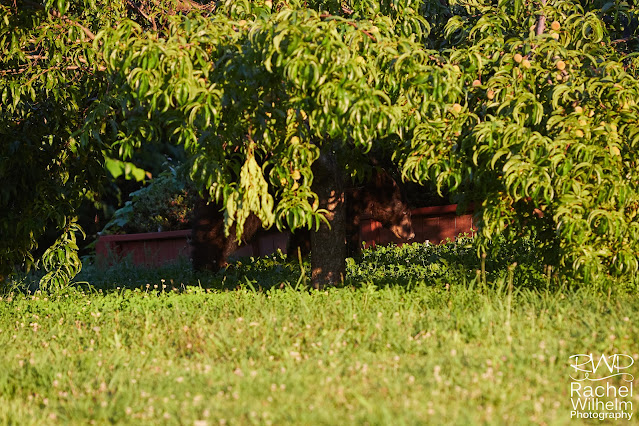 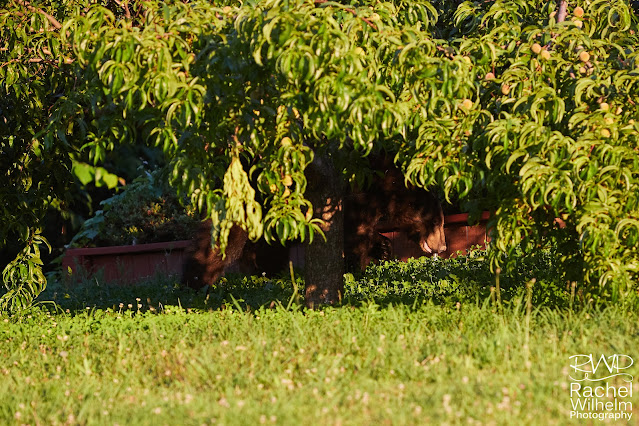 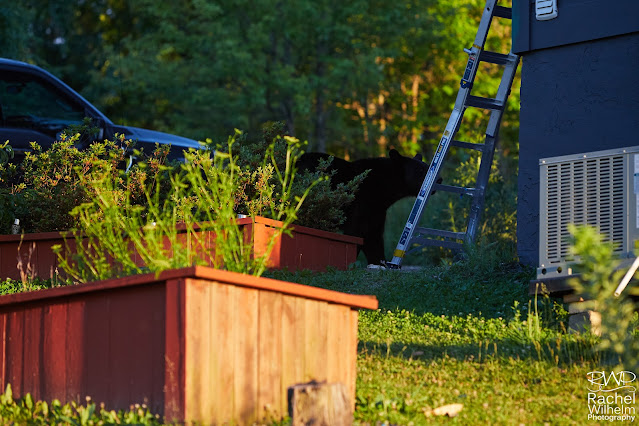 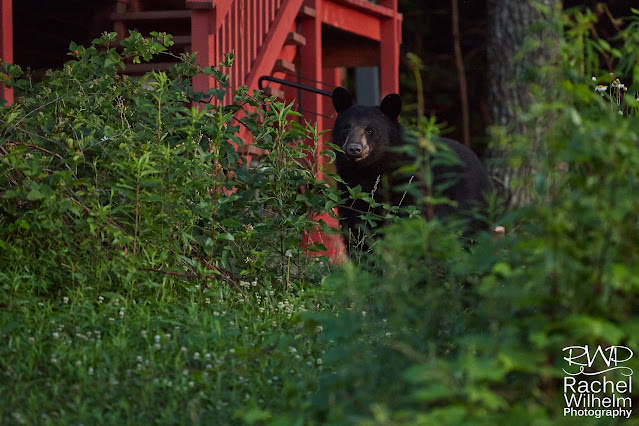 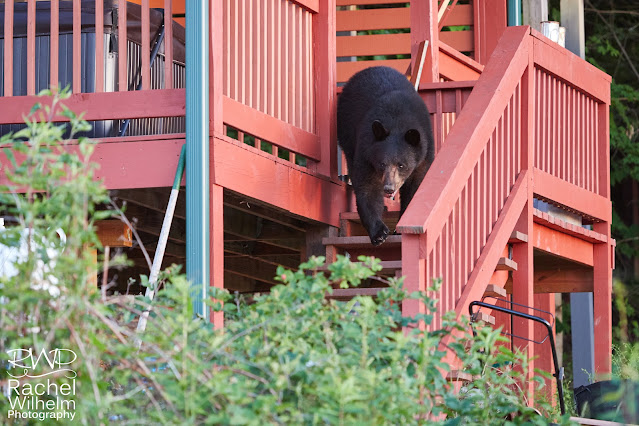 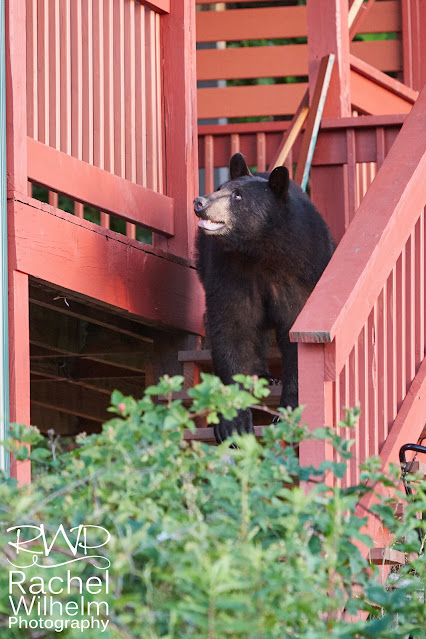 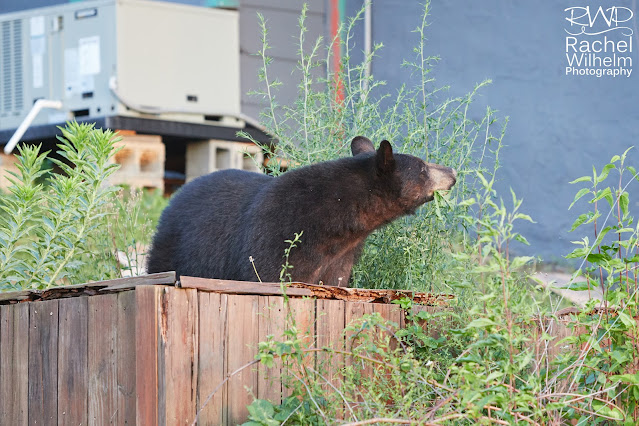 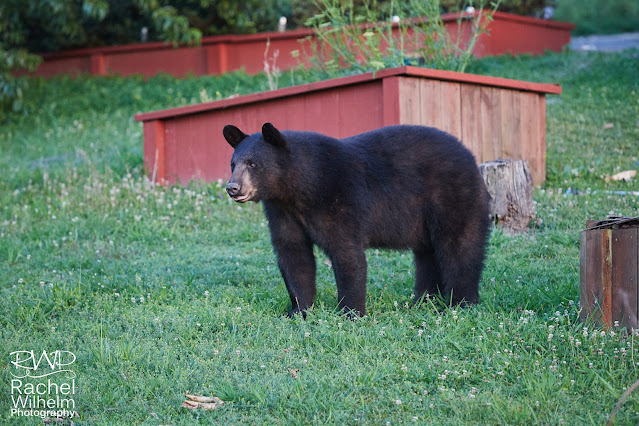 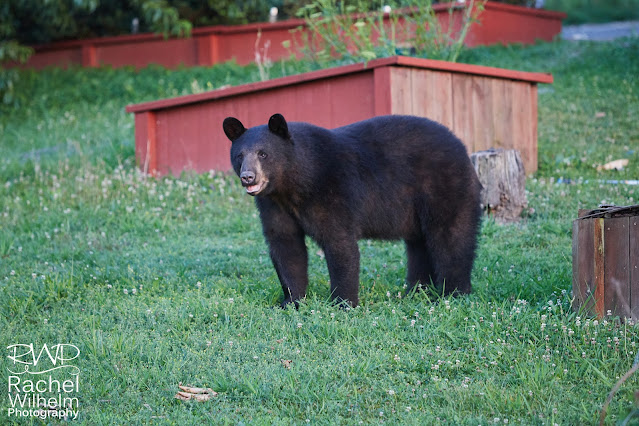 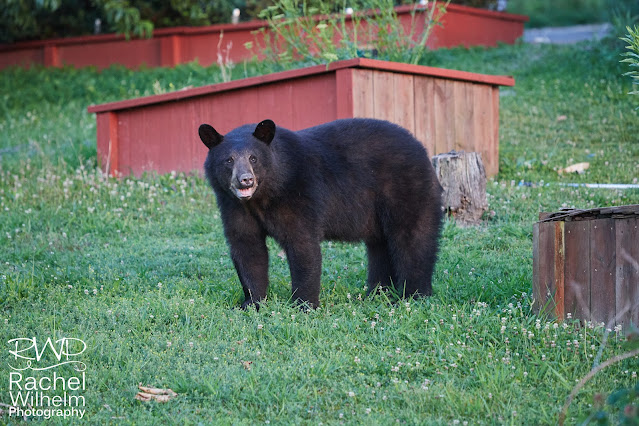 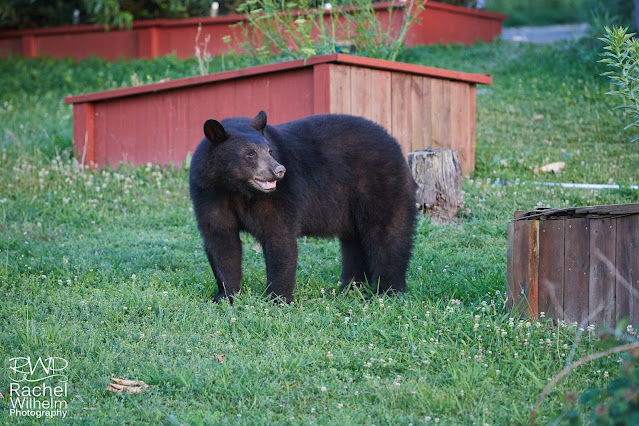 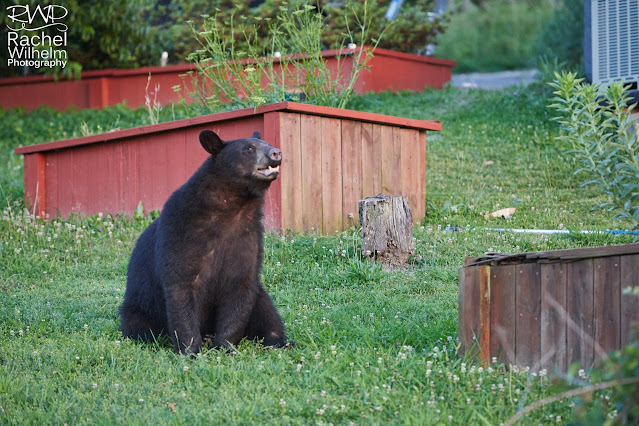 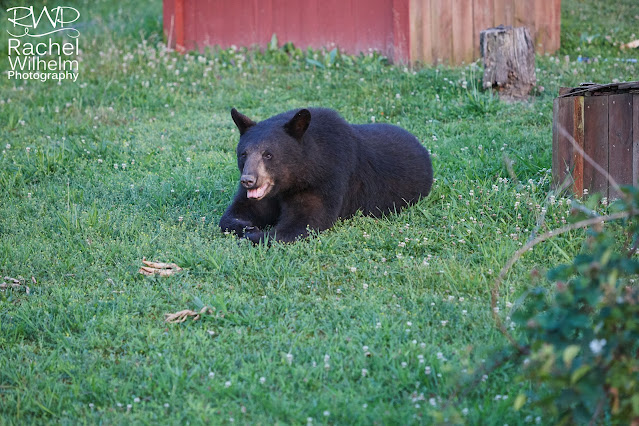 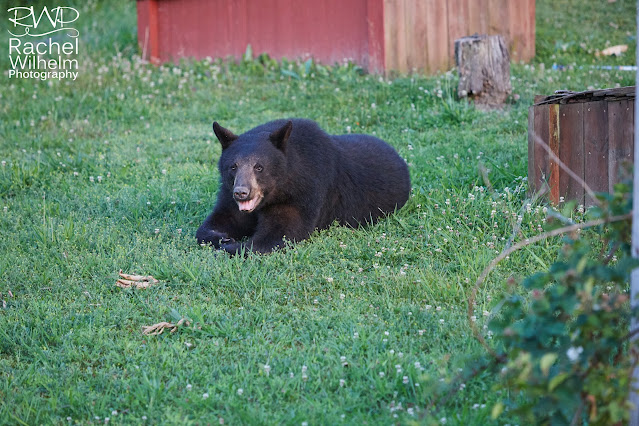 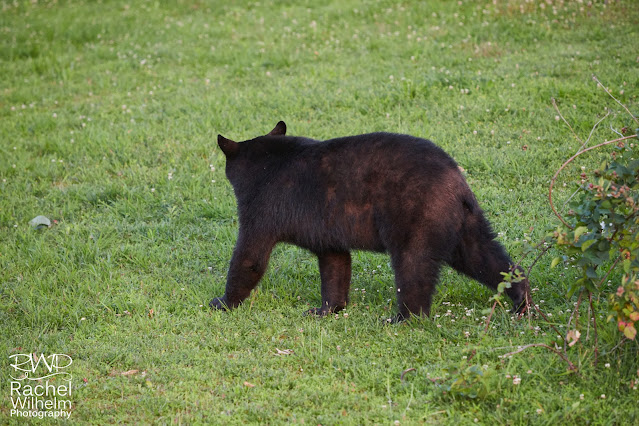 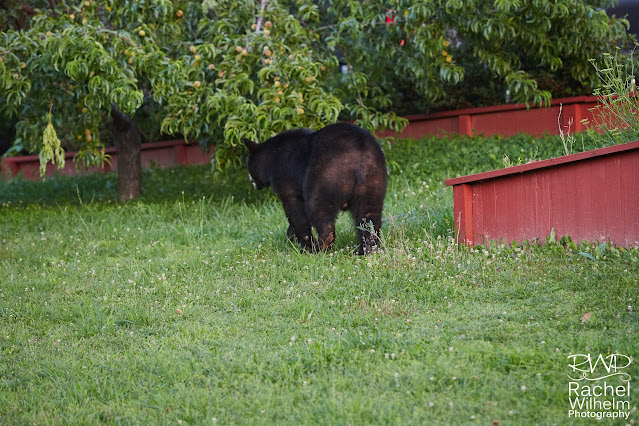 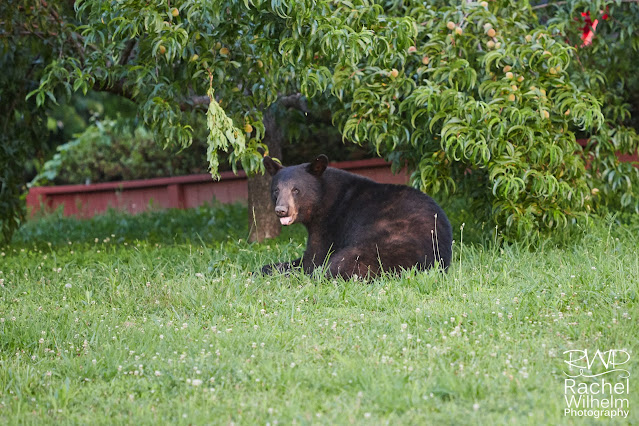 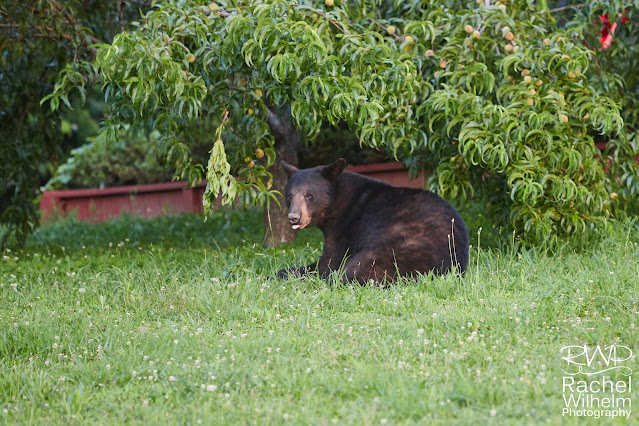 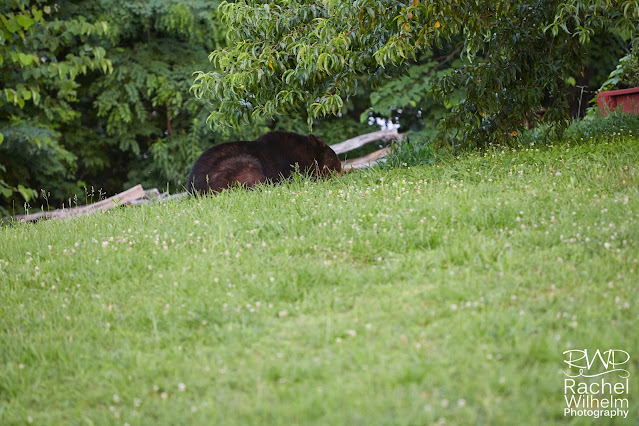 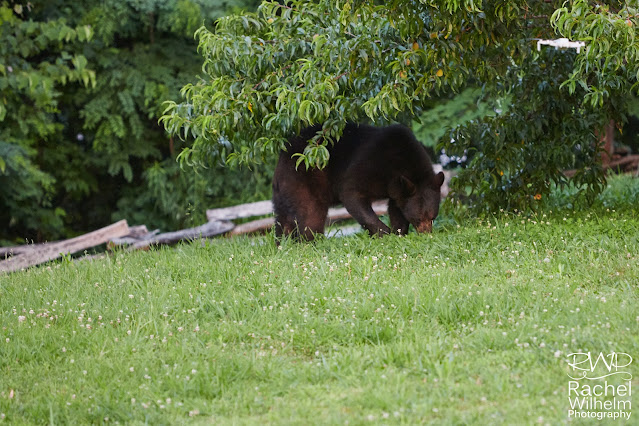 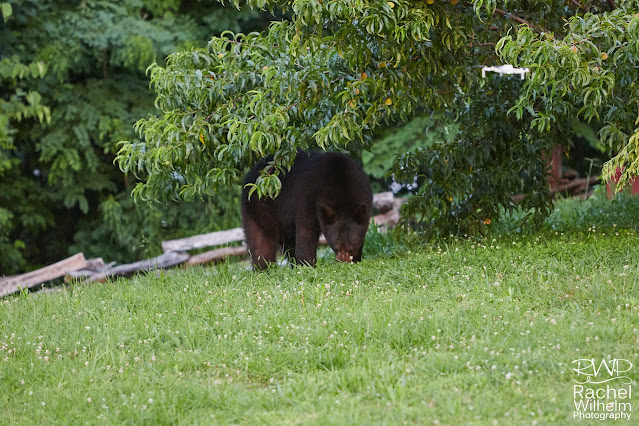 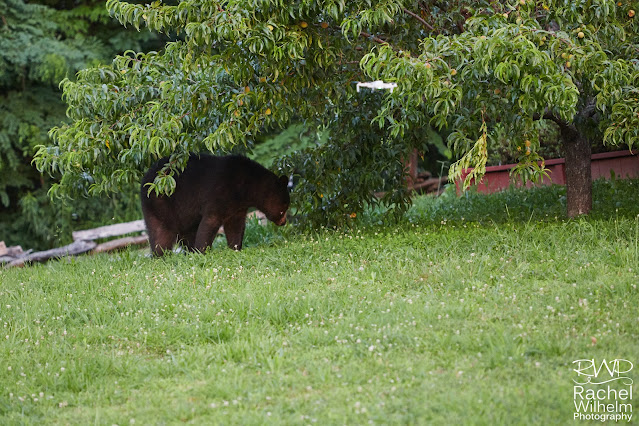 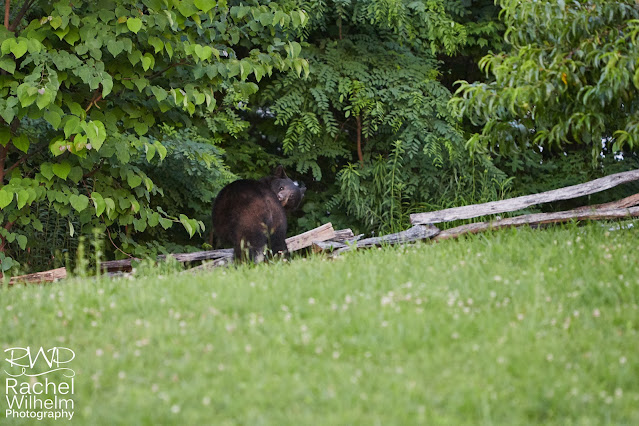 Rachel Wilhelm Photography
I am interested in presenting the unadulterated yet magnificent realities of the world through various forms of photographic endeavors. My goal is to help the viewers see the beauty of life the way I do. And I blog to show off my cute pets. :)